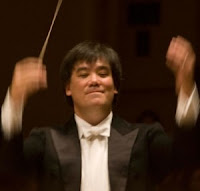 I don't think anyone expected YouTube to become as big as it is. All of that video..I just read a 2010 report of an upload rate of 35 hours per minute!
Within that video torrent of kittens and babies quite a few orchestra videos have been posted.
So here's an idea for a handy practice tool:
videos of the big orchestral pieces
that keep the camera focused on the conductor from
the player's vantage point.
Imagine being able to play through a Mahler symphony using the part and following Alan Gilbert on the screen.
Sure lots of people have played along with recordings over the years but one always had to guess the tempo fluctuations because you couldn't see the conductor!
What a training tool!
Now maybe somebody has already done this. I've heard of some older conductor videos for horn excerpts. Does anyone know of such a collection of videos? If it were made into a YouTube channel, it would be great.
One possible problem: sometimes the audio and video aren't well synced. This should have a simple fix.
There are an increasing number of high-quality web broadcasts of orchestra performances. Most of these are multi-camera affairs with at least one camera always trained on the conductor. Wouldn't it be great to get at that original conductor footage? Does it sit in some archive somewhere?
My search of Youtube didn't reveal much. As part of there Youtube symphony project I found this example of the conductor for that Tan Dun piece. You can even find videos targeted to specific instrument groups.
I also found this example by Teodor Currentzis, a conductor I haven't heard of before (and probably won't hear of again). Here's his bio.
Anyway, is there someone out there with the time and know-how could create something of huge value for the rest of us.
Doctoral dissertation, perhaps?
Posted by Brad Edwards at 9:36 AM