Speaking of Concerts and Auditions

Tonight was Fall Trombone Night. I was very happy with the outcome. When things go this well, I feel as if I'm riding a wave.

I've also been spending a lot of time going over the ensemble placement audition recordings. Here at USC, auditions are recorded and I receive a CD to review. I go through the whole CD once and then, with the luxury of each selection having its own track, I started at the highest scored lyrical selection (or technical, or sight-reading) and then jump around hearing them not in audition order but in the order I initially scored them.

In other words, I start with the track I scored highest and work my way down. This allows me to hear to selections side by side and make sure the scores are consistent. True, this is time-consuming but I know my students have a lot at stake and I want to make sure I get it right.

All this reminds me of experiences I had auditioning when I was a student. There was one guy in the studio who, as far as we could tell, was mildly autistic (or at least had some kind of developmental disorder). He wasn't the best player in the studio, but when auditions came around, he didn't became even slightly nervous. Thus, he played pretty much exactly the same way whether in the practice room or in the audition.

Other players would have to deal with nerves and sometimes end up not playing us well under pressure as they had practiced.

I think it drove some people nuts to be "stronger" players but unable to prove it in auditions while this guy simply continued on his even keel.
Here's this idea in graph form: 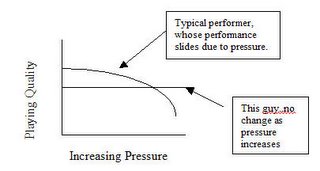 Of course, I have included a third curve which goes up as pressure increases. This kind of player is sometime referred to as a "money player."

Another way to think of it..

There are two skills in music:
A weaker player who is a very strong "money player" can surpass an otherwise stronger player whose auditioning/performing skills are lacking. Nobody can judge you on how hard you worked to prepare. You are only judged on the results coming out of the bell.

The conclusion: you need to have both skills in order to succeed.
Posted by Brad Edwards at 11:53 PM

Here's a first. I'm posting this from a public wifi hot spot in Augusta, GA. Very 21st century.
I'm in town doing a concert with the Augusta Symphony. One piece on the program: the Koussevitsky Double Bass Concerto.

Now apparently, the only copies of this concerto are bad manuscript. So our soloist has prepared a Finale edition of score and parts. One problem: mistakes.

For example, trombone parts without any rehearsal letters. (and of course no cues!). So there we are trying to count 66 measures and then come in on one chord.

Mildly annoying.
Wait, I'm going somewhere with this. At one point, a woodwind principal asks the conductor if he's conducting in 2 or in 4. He expresses mild irritation because it should be obvious. He's right, BUT, that poor musician is already dealing with a mistake-ridden part. I get the impression that dealing with the bad part is occupying so much attention that less is left for other issues.

I also bought a laser printer today. I'm looking over the memory specs and decide to pass on the 2 mb model and pay more for the 8 mb model. I'm figuring, more memory, better hendling of print jobs.

Wait, our attention is like that RAM on the printer. Although flexible, we have some kind of limit. If we use up RAM on bad parts, we have less left for other issues.

Years ago, 60 minutes interviewed Itzhak Perlman. He said he practiced scales while watching sports on TV. At the time I was stunned, shocked, horrified (well not really).

But think about it, if the scales is automatic, that frees up memory to focus on phrasing, balance, and other higher level stuff.

I'm not leading up to some grand moral of the story. Draw your own conclusions.

(I hope you liked the hand-dandy color coding. free of charge.)

Adding Post-It Notes to My Blocks

I tried something new in a few lessons today.

You might remember a previous blog entry where I compared Lego MyBlocks to chunks of complicated licks perhaps better performed from memory.

This idea has stuck with me. Here's a new spin...
In each case, they found it was easier to play the tricky passage when they couldn't see it!

I could bore you to death waxing on and on about the path from notation to sound concept to results and how most young musicians can't form much of a sound concept and how, in France, beginning music students must sight-sing before they pick up the instrument and blah blah blah. But I won't.

Instead, I'll just say: cool! A new one for my bag of tricks!
(mustn't get stale)
Posted by Brad Edwards at 9:22 PM

Quick summary: Pavlov serves food and rings a bell. Dogs salivate over the food. Eventually, he rings the bell without any food present but the dogs salivate anyway. I believe this is called a conditioned response.

Response: salivation
This theory is sometimes called the "Ding-Slurp" theory.

Think about a tricky passage..

All too easily you can end up with:

How to turn this around? Try looking at the tricky passage but play it in a simple, lyrical style (slow, smooth, totally relaxed). The key is to look at the notes as you play in a relaxed style. You are trying to build this..

It might work. At least it's worth a try.

Bozza and My Blocks

I am coaching my son's lego league team. If you're curious, here's a link:
http://www.firstlegoleague.org/

In programming these little robots, we use the Lego Robotics Invention System. Basically, the kids learn to program by connecting blocks on the screen (like, "Forward 10 seconds").
Pretty cool.

You can create custom blocks called "My Blocks." Each block is a "basket" of little commands,

One of my students is tackling Bozza's New Orleans, a jazz-influenced chromatic French piece. He sometimes gets hung up on some of the chromatic passages. In the last lesson, we tried the strategy of quickly memorizing chunks of music and working them up without looking at the page.

When I play complicated, chromatic passages, I look at the passage but then essentially play the pattern that I have memorized. I glance at the passage and, hopefully, it evokes my memory of the lick. Instead of focusing on individual notes, I try to automatically play the whole chunk,

Treat complicated licks like those Lego "My Blocks" As you play the piece, hopefully the sight of the lick will trigger a mental subroutine which can be played automatically.