OK, so here's something that almost seems un-humanly fast and clean.
I think it's interesting that the video tacks on some audio of him improvising at the end almost as if to say, "Yeah, he can play that fast."
I noticed this in the comment section below the video:
This recording seemed a bit too fast and too perfect even for the doodle master, so I emailed him, and he graciously responded: "Obviously it's been tweaked, but not﻿ for speed. I tracked all the parts in real time (no slowing down or speeding up), punching in and out like crazy, of course, to get it really accurate with no errors. ..The result sounded really good without any tweaking, but I couldn't resist so I proceeded to line up notes timewise (when needed) to see how far I could take it."
Posted by Brad Edwards at 1:23 PM

Here's something new I've been trying in lessons this semester. All the students have a "big idea" journal (actually, they have two: one on paper and one online). While most of the entries come out of lessons, sometimes they do add in some of their revelations from practicing.
Now that we are at the halfway point of our semester, I thought it might be interesting to put together a random listing of "Big Ideas"
Posted by Brad Edwards at 3:45 PM

Email ThisBlogThis!Share to TwitterShare to FacebookShare to Pinterest
Labels: teaching

OK, it's confession time.
I'm a trombone professor so I'm supposed to be interested in the history of the trombone. Fascinated by it. Obsessed with it.
Except I'm not.
Don't get me wrong, I know of a lot of basics and keep learning as I go.
I'm really impressed by the online history posted by Will Kimball.
But, as I read it, or read Trevor Herbert's book, I can only process so much detail before numbness sets in.
A few years ago (and way past its shelf date) my kids and I get a copy of the original Myst game and played it together one summer.
We had a blast and, yes, sometimes we got stuck.
That's when we discovered the UHS website (Universal Hint System). What we liked about this site was the manner in which it gave progressively more obvious hints to help us through the game. So, if you're stuck, you start with the first one or two hints.
Something like this:

If you're you're still stuck, you can click on more hints until you are basically reading a walk-through.
Something like this: 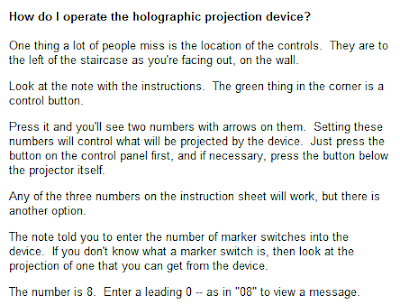 All this makes me think about the sense of detail overload I get from reading trombone histories.
Maybe the information could be presented in a "UHS manner". It would start with something fairly basic and then give you the option to increase the level of detail.
It could look something like this:
The Trombone first appears around 1400
CLICK HERE FOR MORE DETAIL
Later on, if you sought more detail, it might proceed like this:
The Trombone first appears around 1400
Some scholars think they appear in
northern Italy and southern France (Eliason)
According to other scholars, it is more likely,
based on performer nationalities and manufacturing locations,
that the trombone originates in Germany
(Herbert, Susato 117; Polk, Archival Documents)
CLICK HERE FOR MORE DETAIL
(Much of what you see in the example above
I pasted from Will Kimball's excellent history.)
I guess this basically boils down to an outline history. Still, I think there might be something appealing in the concept of presenting a tidbit of info and tempting the reader to move into deeper detail if they want.
Hmmmm, maybe an online application for this? I would say "an app for that" but I hear Apple is claiming that they own that phrase.
Still, I could see some enterprising DMA student running with this idea.....
any takers?
Posted by Brad Edwards at 9:10 PM

Yin and Yang for Slide Technique 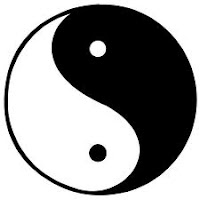 Slide technique should be so simple.....right?
Just move the slide to the right place at the right moment...right?
Well knowing it and actually doing it can be two different things. Here are two exercises that may be helpful. Neither one is original.
In legato, we want to stay on each note as long as possible. So, that means move the slide at the last instant (while staying relaxed...I like the verb "flick" as in "flick the slide at the last second")

Another trick I've seen pertains more to speeding up the slide in tongued passages. It involves moving the slide right after the note sounds:

It never occurred to me that these two exercises are so yin and yang. In the first, you move the slide at the last possible second. In the second, you want the slide in the next position at the earliest possible second.
Posted by Brad Edwards at 10:26 AM

Don't lose the sound as you add the sizzle 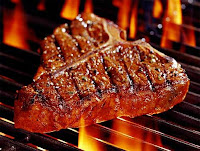 A quick thought...
We all want to deliver a compelling performance.
We all want a good sound.
Sometimes that pursuit of musical excitement can get in the way of the good sound.
Sometimes that pursuit of good sound can get in the way of musical excitement.
Don't lose the sound as you add the sizzle.
(and don't lose the sizzle as you improve the sound)
This seems to be something I constantly struggle with. I have had too many performances where, in going for musical excitement I lose control of my sound. It's all about maintaining that beautiful balance.