I ask them why. The usual response: I don't know. I've just always done it that way. Nobody ever told me how.

Why do we multiple tongue at all?
Because you can't reset the tip of the tongue fast enough over and over.

Here's my contention (argue if you want): the second of the two "TA's" is the weaker one because the tongue has to do that rapid reset.

So...the whole point of using that inferior "KA" syllable is to give the tip of the tongue time to reset.

Putting ka at the end makes it easier to emphasize the beginning of the triplet.

(By the way, in the new Arban's book, both Bowman and Alessi prefer ta-ta-ka)

If you are used to the other way, use this exercise to help you... 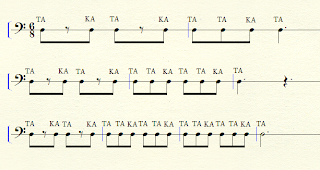