We did an orchestral excerpt class focusing on the finale to Bruckner's 8th symphony.
Here's that opening passage:

Everybody starts fortissimo on an F-sharp out there in that treacherous 5th position.

Perhaps you've heard that, if it is in tune, a note will sound louder.

Here's a picture of two waves that are slightly out-of-sync.
Of course, if they were out of tune, you would see the peaks of one wave closer together than the other so this picture isn't perfect but hopefully you get the idea.

Here's the thing: when out of phase, the waves partially cancel each other out. Here's a great link explaining this concept.

In fact, I once saw a dog wearing collar that used active noise cancellation to cancel out the bark.
Something like this: 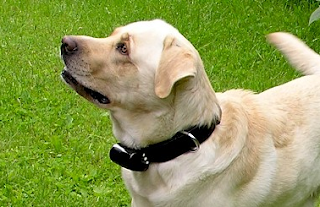 So, if I understand it, the collar has a microphone that records the bark and a speaker that plays it back out of phase, canceling the original sound.

Of course, we don't want to use noise cancellation in Bruckner!
Play it in tune and it will not only sound louder, it actually will be louder.
Posted by Brad Edwards at 12:03 AM