This idea isn't really original. I think I first saw it presented by Ron Barron.

The basic question? How much freedom do you have as a player?

Depends on what you're doing. If you're making an audition tape, especially one for an orchestra, I think you have the least freedom. You just don't know how you're going to be evaluated so you have to stick to the ink.

Similar with a first-round audition. So many people, so many cuts that need to be made. I have to think that most committees are looking for a reason to say no.

In later rounds you are more focused on giving the committee a reason to say 'yes' so perhaps you can begin to show your individuality.

Of course, depending on the conductor, you might have more freedom in a live performance. 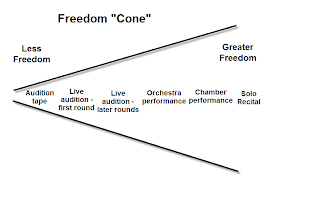 By the way, respected friend of mine disagrees with me and, frankly, she has heard a lot more professional auditions that I have.

Her contention: In that first round the committee is desperately looking for a reason to say 'yes' but candidate after candidate fails to give it to them.

Anybody out there have a lot of experience with professional auditions?
What do you think?
Posted by Brad Edwards at 10:43 PM