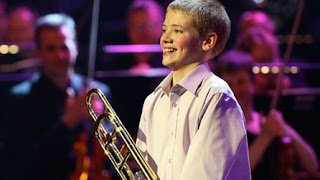 And now, from the "thank heavens I have a job" department a youtube clip (thanks to Kevin Jones for the heads-up).

Peter Moore was last night named BBC Young Musician of the Year 2008 at a nail-biting and visually stunning final at Wales Millennium Centre, Cardiff - the youngest ever winner of the competition.

Organised by BBC Wales, this was the first all-male final and trombonist Peter, aged just 12, took the coveted title against stiff competition from talented young musicians from around the UK.

Belfast-born Peter now lives in Stalybridge and is a pupil at Chetham's School of Music, Manchester. All his family members are brass players and his parents were both French horn players in the Ulster Orchestra. His brother David is studying at the Royal Northern College of Music in Manchester and also entered the competition.