Weebles wobble but they don't fall down...

Randall Cunningham could get hit and somehow stay on his feet. (Anybody remember that Giants game years ago when he get clobbered .. almost completely upended but came down on his feet to throw a touchdown pass. Still the greatest play I have ever seen.)
No, this isn't that play but you get the idea.. 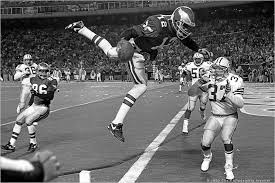 And the headlights, you ask?
you're driving down the road at night and hit a nasty bump. You're annoyed you didn't see it in time to swerve. You think, "Man that was a bad pothole. "

You turn around to look back at the hole instead of where the headlights are pointed.

That's when you hit the tree.