I'm returning to a topic I've hit before...distance and pitch. Here's my older post, Speaking of the Devil.

There seems to be this misconception out there that, the farther away the instrument, the flatter the pitch.

Not true.
I've even debunked years ago by going outside with a trombone, two tuners and some observers. At one spot, the trombonist played an in-tune B-flat while watching a tuner.

About 20 yards away, some observers also held a tuner and guess what, IN TUNE!

OK, let me address some of the comments in advance:
Ah, now that last one is interesting.
Let's say a trombonist plays an in-tune A=22o. That means 220 vibrations per second are leaving the bell and travelling out for all the world to hear.
What if there is a strong wind blowing from behind the player. Does the wind accelerate those sound waves, creating a higher pitch?
What if the opposite is true: wind blowing in the player's face, lowering the pitch from a distance.
After all, that wave is using air as its medium and now the air is moving.
So, the next time we have an intrepid reporter talking about all the winds and rain and storm surge, hand 'em a trombone and let's check some pitch! 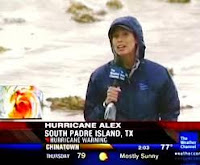