Surprise Rides and Such

Recently a student was struggling a bit in a lesson when, outside my window, a formation of helicopters flew by unexpectedly. When he saw them, without thinking he launched into Wagner's Ride of the Valkyries.
Interesting...the struggles present in the piece we had been working on suddenly vanished as he played this unexpected Ride without thinking. Remember those words: without thinking (at least not consciously!).

At the Eastern Trombone Workshop (which I sadly couldn't attend), Ko-Ichiro Yamamoto
apparently did a master class and spoke about playing bass trumpet in Wagner's Ring Cycle. If I understand correctly, he talked about picking up the horn at various times and playing some of the solo passages without relying on warm-up notes. (hope I got this right).
Interesting: being ready to go without needing those warm-up notes. 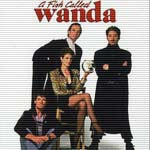 Reminds me of that movie, A Fish Called Wanda, in which Kevin Kline awakes to his alarm clock, immediately grabs a gun and fires at a target. (Followed, if I remember correctly by blowing up a rubber boot or something psycho like that).

I assume you know about the whole helicopter ride of the Valkyries thing.

By the way, this video has some violent war footage, don't click to view if you'd rather not see such things.

Email ThisBlogThis!Share to TwitterShare to FacebookShare to Pinterest
Labels: excerpts

A former student of mine posted this video on YouTube recently. It's his performance of Berio's Sequenza No. 5.
A few quick notes:
Luciano Berio was a brilliant 20th century composer. He wrote a series of Sequenzas for solo instruments.
The trombone sequenza, unlike the others, involves an element of theater and is dedicated to the famous European clown Grock.
Given that the piece is dedicated to clown, performers sometimes dress appropriately.
I believe the first half of the piece represents the clown's extroverted side while the second half focuses on internal struggles (insert "Tears of a Clown" comments here).
The notes are anything but random as Berio pays careful attention not only to pitch but register as well.
My first teacher, Ron Borror, once pointed out that the first complete tone row of the piece (which is developed bit by bit) devolves into a rapid, random pattern from which only two notes jump out: B and G. Hmmm....Berio and Grock??? One wonders.
At the midpoint of the piece, the performer stops and asks, "Why" often elongating the word. This was apparently a trademark gesture of Grock's. In his act, he would often do something ludicrous, pause, and say some non-sequitor like, "Why?"
Oh yes, Grock could play quite a few musical instruments and went on to own his own circus if I remember correctly.
(insert distant sound of crickets and snores...
maybe too much detail, sorry)
Whatever, enjoy the video...

Here's my second deep question for the Alessi seminar.

Should you play with just intonation when playing alone?

It seems trombonists agree (as they should) that the third of a major chord should be lowered.
For example the D in this chord:

But what if you're playing an audition round alone and you run across this passage:

...or the G-sharp in this passage:

Will it sound better with just intonation or equal temperament?

Here's a link to a summary of intonation adjustments on the BoneZone website.
Posted by Brad Edwards at 11:14 PM

Concert in Charleston this weekend

This email from forwarded from former student:

I wanted to pass on the word about this wonderful Duo that will be performing this weekend in Charleston. Details below!

Works by Stockhausen, Badinski, Amron, a premiere by Trevor Weston, plus improvised compositions.

ALSO - the Duo will offer a Master class on contemporary Cello and Trombone Music in the Recital Hall for performers and composers on Saturday March 24th at 3 PM. As a final offering, Jason and Steve will present a concert of solo pieces on the 25th at 3pm, venue, TBA.

Here's a trick to help with expressive playing: play your phrases as musically as possible on one note.
Take Guilmant's Morceaue Symphonique, for example:

The top line is from the piece. The second line is the same rhythm without the pitches. I've circled two notes that points of greater musical tension. Aim at these notes.
Once you can play very expressively on a single pitch, add in the pitches and see if it has gotten better.
This reminds me of that observation that, when a person loses one sense (sight, for example) other senses become more keen. Once deprived of convenient pitches, you become more keenly aware of other elements that go into phrasing: dynamics, intensity of sound, vibrato, note shape, etc.

This one-note technique can also be used to clarify rhythm. Here's an example from a Galliard Sonata...

Hope this helps.
Posted by Brad Edwards at 3:09 PM

I just got word that I've been selected to be a participant in this summer's Alessi seminar. I hope that I'll be able to generate some good blog entries from the event. Stay tuned.

When I go there, I hope to hear his (and others') opinions on some of those deep questions for which there are no quick answers (or maybe there are).

So, as I think of these questions, I'll just blog them to make a list.

Trombonists seem to have a hang-up about slide vibrato. We often think of it as cheating. I would agree that lip vibrato is probably tougher (esp. in the high range) but ...
What if the easier solution also sounds better?
I do know this: whenever I play for non-trombonists and give them the choice of slide vibrato vs. lip vibrato, they usually go for the slide vibrato.

Why do so many people have this thing about slide vibrato?
Is it because it's connected with jazz, which some people look down on?
Is it because some view it as wimping out from a "real" vibrato?

Oh yeah, there is that whole first position problem to think about.
My opinion: do what sounds best.
(and yet, I still feel that reluctance, too)
Posted by Brad Edwards at 12:45 PM

Email ThisBlogThis!Share to TwitterShare to FacebookShare to Pinterest
Labels: vibrato

I recently put down some money on a new recorder, the Zoom H4. So far I really like it. I used to use a mini disc recorder and like it but was plagued with the problem of transferring data easily to the computer in order to burn CD's.
This new recorder records directly to an SD card (same as they use with most digital cameras) which you can easily pop into a computer.
A few other features...
If you are serious about succeeding on the trombone, you need to record yourself regularly. You'll need to make audition tapes and demo tapes. This little machine does a beautiful job with a minimum of hassle.

Generally you can get it for around $300. I paid $279 from minidisco.com.
Here are some links if you're interested:

Time to head on down to Orlando with the kids. So I guess a Disney spin is appropriate. 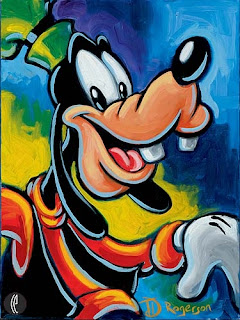 Here's a trick I've been using in some lessons. Buzz sustained notes with a ridiculously wide vibrato...one might say a Goofy Vibrato.

I think this helps in a few ways:

Make sure that, as you buzz with that wide vibrato, you don't lose the center of the pitch. Also, make sure the air continues to flow.
You can also try goofy vibrato on the trombone (stay relaxed, keep the air moving!)
Posted by Brad Edwards at 11:21 PM

How to triple tongue?

Most of students cling to the first way and, having already learned it, are naturally reluctant to change.

Well, why do we use the Ga syllable at all? To give the tip of the tongue a chance to reset.
Doesn't it logically follow that that weakest note is the second of the two "Da's"?

Usually when playing a string of triplets, don't we want to put a slight accent on the beginning of each triplet? If so, Da-Ga-Da Da-Ga-Da puts you at a disadvantage.

For my money, Da-Da-Ga is the way to go. This puts the weakest note in the middle.

Of course there are those purists who use...Da-Ga-Da Ga-Da-Ga (starting every other triplet with Ga).

Well, maybe for you but for me that's just too weird.
Posted by Brad Edwards at 5:15 PM

Sorry..long time since my last post. Other projects have gotten in the way.

Here's one way to think of practicing, it's a little like playing frogger...

Not the first part (with the cars) but the second with the lily pads. Well, at least sort of...

Suppose you're learning a new technique like......double tonguing. You can think of each stage of the learning process as a lily pad. You hop from lily pad to the next.
Like this: 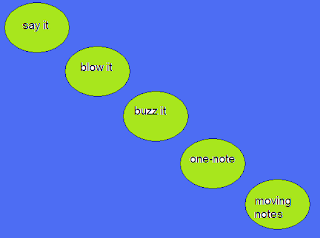 Start with something natural, like saying "da-ga-da-ga" quickly.
Now blow air against your hand using the same syllables.
Now buzz it on your mouthpiece.
Now play it on one note on your horn.
Now play it with moving notes.

If you get stuck on any one lily pad, simply jump back to the lily pad before. If that doesn't work, jump back again.

Just don't tense up and fall in the water.
Posted by Brad Edwards at 9:43 PM