Today I was coaching someone on excerpts for the upcoming Mississippi Symphony audition and two "blogworthy" ideas popped up in a single excerpt: Appalachian Spring. This excerpt has that melodic trombone solo in G-flat major, if you know it (basically, "Simple Gifts").

Idea #1: Picket Fences.
This key isn't the friendliest for trombone. Imagine how much easier the solo would be if it were in A-flat, for example. Ironic, really. How often in orchestral music does the trombone get an exposed legato tune sitting in the mid-range? And, of course, in one of those rare moments where we actually get a tune to play, it has to be in G-flat major.

OK, so here's the thing: nobody cares if it is an awkward key. They just know the tune and want to hear it played well.

So why 'picket fences'? For some reason this makes me think of the 1950's stereotypical neighborhood with all those nice houses and their white picket fences. Everything and everyone was expected to fit within a mold. Sort of like that old TV show, Father Knows Best... 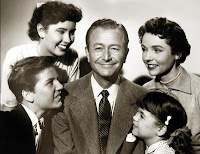 We don't know what goes on behind the closed doors of those nice houses with those nice families. I imagine there was a lot of social pressure to not reveal problems.

(Perhaps little Jimmy is an ax murderer
but let's not let the neighbors know about it!)
It's like that trombone solo. The audience doesn't care about your troubles. They just want to hear a pretty tune played well. Any problems playing it are your problem and not to be shared with the audience.

So...play like it is easy. Label it not as something awkward but as just a nice tune.