The Continuum of Outcomes 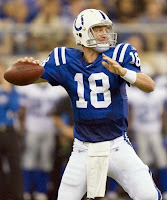 OK time to get a little philosophical. Today the USC School of Music hosted Todd Kays, a sports psychologist. Here's his website, The Athletic Mind Institute.

One aspect of his presentation got me to thinking more about something...
Outcomes vs. Process

Now, I'm not sure I like that term, "process" but here's the basic point (using the upcoming Super Bowl as an example).

There are those things you can control and those things you can't. For example, Peyton Manning certainly wants to win but he can't control the outcome of the game. At a critical moment, one of his receivers may slip, leading to an interception. His stats get worse even though that was an outcome he couldn't control.

You go to an audition. You certainly want to win but you can't control the outcome. At a critical moment, the room may be too cold or the committee too distracted, or the committee may already have someone in mind, or you might come down with the flu, or......
(you get the idea)

What's an outcome? What is the process? In one of our sessions with Dr. Kays, I described one set of goals: improving my ability to play passages that were fast, loud and descending. To me, those are goals/outcomes. To him, they were the definition of "process" not "outcome." It seems we were saying the same words but with different meanings.

I often have thought of it this way:
You have internal goals and external goals.

So here's my new idea...instead of thinking of a dichotomy, think of a continuum.

One on end of the continuum for Peyton Manning you have the most internal of goals...
"plant your feet"
"watch the positions and movement of the defensive players"
"adjust the play and call it out to your team"

These things he can control.

At the middle of the continuum you have these kinds of goals...
"time the pass well"
"throw a good spiral"
"thread it between the defenders"

On the other end of the continuum..
"throw a touchdown pass"
"win the game"
"be declared MVP"
"go down in the record books"

These things he can only partially control.

In an audition you have internal goals...
"know exactly what the excerpt should sound like"
"breathe well as you play"
"listen carefully to your sound/intonation/ etc."

In any audition or competition...

Focus on the internals
Let the externals take care of themselves


PS The images I used were from a Google image search. I don't know anything about Jon Gorrie or his book but for some reason I like the photo...
Posted by Brad Edwards at 8:51 PM