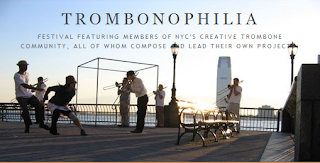 OK, this looks interesting and way over my little head. Still, perhaps someone out there might want to know about it.

The group has a choreographer and yet I find no video on their website or on YouTube. I get the feeling it would be interesting.

Here's a link to their blog:
http://trombonophilia.blogspot.com/


Here's the announcement that was emailed to me...

June 2007 at the Stone curated by Christopher McIntyre


Tuesday's and Thursday's (plus Friday June 1 & 29)
Trombonophilia
A month-long festival featuring New York's unusually creative group of local trombonists, all of whom compose and lead their own projects. Visit the festival site for more info at www.cmcintyre.com/trombonophilia.htm